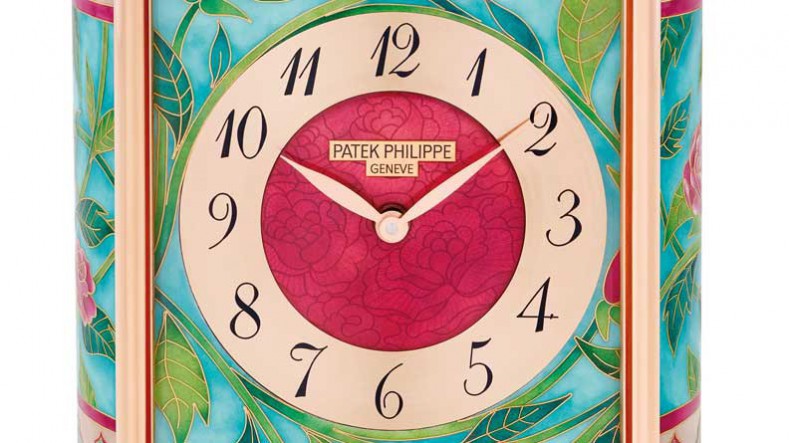 During a private dinner cum auction hosted by Patek Philippe on 23 September 2015 in Singapore, three one-of-a-kind dome table clocks not only set record-breaking prices but raised a grand total of SGD2.45 million. Though the brand did not even earn a single cent from the event with their specially-created dome clocks, Copy UK Patek Philippe Honorary President Philippe Stern who was present at the dinner, was extremely contented. That is because the three dome table clocks were donated by Patek Philippe and the entire proceeds raised are for specially-selected beneficiaries. If based purely on the reserve auction prices, the minimum sales proceeds would have been SGD820,000 but the actual sales trebled that.

The three dome table clocks were the Ref. 1665M “Peranakan Culture” (reserve price of SGD250,000), Ref. 1675M “Farquhar Collection” (reserve price of SGD270,000) and Ref. 1677M “The Esplanade – Singapore” (reserve price of SGD300,000). These dome clocks were made to commemorate the 50th anniversary of Singapore’s independence (1965 to 2015) and are a gift to this young country. Singapore became an independent nation on 9 August 1965 after separating from Malaysia. Coincidentally, that was the same year Philippe Stern first visited Singapore to establish the brand’s presence. The brand has continually grown from strength to strength and Singapore is an important distribution hub for Patek Philippe in this region. There are close to 20 distribution points in five countries (Indonesia, Malaysia, the Philippines, Singappore and Thailand), says Dirk Paulsen, Director, C. Melchers GmbH & Co., who oversees the Patek Philippe business in this region under a close and long-term partnership between C. Melchers and the brand. It was therefore a double celebration for both Singapore and Patek Philippe. Moreover, creating and donating three dome table clocks for Singapore alone is by itself, a strong statement for this market.

The “Peranakan Culture” dome table clock was sold for SGD700’000 with the entire proceeds going to the Peranakan Museum.

Patek Philippe only produces an average of 12 dome table clocks a year, highlights John Reardon, Senior Vice President, International Head of Cheap Copy Watches at Christie’s. This means this small nation received 25% of the brand’s worldwide allocation of dome table clocks for the year. What must also be noted is that only those present at the dinner could make bids for the dome clocks. Thanks to the generosity of the successful bidders, the beneficiaries will receive an unexpected windfall with the additional funding. In other words, it wasn’t just a double celebration, it became a triple treat.

The three dome table clocks reflect themes that were integral to Singapore’s history and evolution, notes Thierry Stern, President, Patek Philippe. For example, the flora and fauna decorations using the cloisonné enamelling technique on the Ref. 1675M “Farquhar Collection” is inspired by the William Farquhar Collection of natural history drawings. These are watercolour paintings commissioned by Farquhar and done by Chinese artists when he was in Malacca, Malaysia between 1803 and 1818. Farquhar was Singapore’s first Resident and Commandant from 1819 to 1823. 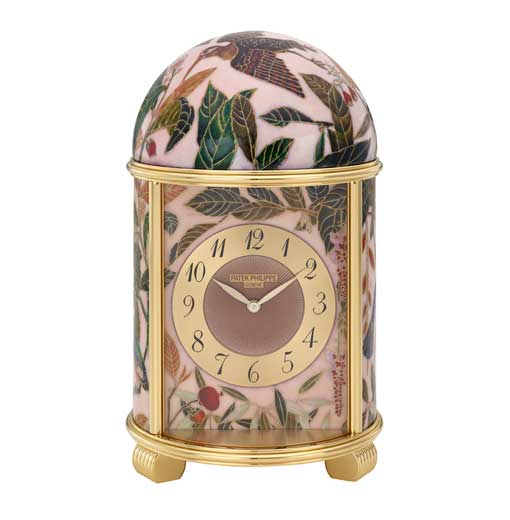 The “Farquhar Collection” dome table clockwas sold for SGD750’000 with the entire proceeds going to the National Museum of Singapore.

The buyer of the Ref. 1675M “Farquhar Collection” was Dr Henry Tay, executive chairman of luxury retail group The Hour Glass, a company listed on the Singapore Exchange. The group is well-known for their replica watches for sale shops in Singapore and the region. It is understood that Dr Tay has generously donated the dome table clock to the National Museum of Singapore, the very same owner and custodian of the William Farquhar Collection which will, in Patek Philippe speak, “… look after it for the next generation”. In fact, make it “… for many generations to come”.

The Ref. 1655M “Peranakan Culture” is a tribute to Peranakans, broadly defined as Straits-born Chinese who are descendants of Chinese immigrants from as early as the 15th century who married natives of the Malay Archipelago and Bataks from Sumatra. They are also known as the Straits Chinese, notably those born in the then British-controlled Straits Settlements covering Singapore, Penang and Malacca.

Reardon singled out this “Peranakan Culture” in particular as it is the very first in rose gold made for Patek Philippe’s third series dome clocks.

The Ref. 1677M “The Esplanade – Singapore” which depicts modern Singapore’s skyline hand-guillochéd in cloisonné enamel with silver leaf features familiar landmarks such as the Marina Bay Sands, ArtScience Museum and the Singapore Flyer under a sky lit up by fireworks as this is the country’s golden jubilee year of independence. 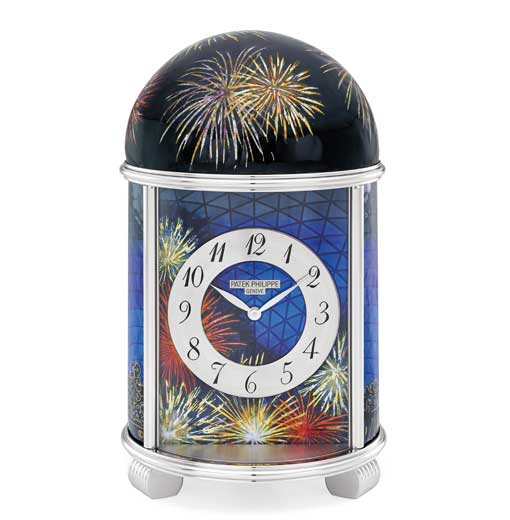 “The Esplanade – Singapore” dome table clock was sold for SGD1 million with the entire proceeds going to the Community Chest for beneficiaries of its “Heritage Cares” program.